In 1948, Paul Émile Borduas, published Refus global, along with ten other people. He was 43 years old. Refus global was an expression of the extreme sensibility that an artist must possess when dealing with the state of the world, especially in terms of how society shapes the human condition.

Some artists only create in order to express how they feel while others create despite how they feel. Between these two extremes, we find every shade of emotion.

Recently, I wrote that we are all artists. We all respond to reality through our own sensibility. Given that human nature is essentially social, we mostly respond to social things, to whatever society and its constituents do with us or despite us.

A few weeks ago, there was an information meeting about new facilities that are being set up for artists, who are growing in number in the neighbourhood.

At one point in the meeting, a young artist, perhaps the youngest in attendance, complained of the lack of exposure that is granted to contemporary art in the neighbourhood. Someone with years of experience in the cultural sphere replied by saying that the biggest names in contemporary art do not, quite simply, show their art just anywhere if they don’t believe there is anything to be gained by it.

Upon hearing this, I told myself that society had changed a great deal since 1948. When Refus global appeared in 1948, the writers of the manifesto criticized the Church, society, the art world, as well as the way art was made and taught. In response to this, the Automatistes aimed to plumb the depths of the unconscious through their art by reaching for the core of what makes us authentically human, for a way of being that cannot be defined or prescribed in advance.

Since then, art has been transformed into a market (cf. Raymonde Moulin, Le marché de l’art. Mondialisation et nouvelles technologies [The Art Market: Globalization and New Technology]) in which the most remarkable works of art attain the highest monetary value. The very thing that had always remained out of the technocratic world’s grasp has reached great, quantifiable heights.

As for society, it has become more conformist than any society that came before it, save, perhaps, for the Victorians. Our society promotes a single mindset that only understands mathematical quantities, a globalised society that is exclusively concerned with markets and economics. Borduas and his ten compatriots believed that they were getting to the root of the ills that plagued their society. Descartes, in his day, spent seven years travelling across Europe before writing The Discourse on the Method, which allowed him to free himself from the single mindset that prevailed in his time. In 1948, the Automatist movement didn’t succeed in its aims and the single mindset re-established itself, just like in the days of Diogenes, who loathed it.

For a few decades, there existed a type of art that was known as the avant-garde. Like anything else, when something is done the same way for a certain amount of time, creative audacity fades into conformity.

I was in my forties when I decided to pursue a master’s degree. I couldn’t believe it when I heard my professor say with a straight face that one had to have a master’s degree to be an artist in this day and age and that it was only possible to make art out of art. This is akin to claiming that a fisherman must wear a certain uniform and only fish from the deck of an ocean liner. The days of fly-fishing and wading waist-deep into nature are over. Nothing but the nice big fish you catch in the net and the ship’s captain keeps it to himself.

More and more, we are told that art must be made according to the diktats of the current age. This is the type of art that is shown at international fairs and measured in terms of celebrity and a significant amount of green bills. In a book entitled Le paradigme de l’art contemporain [The Paradigm of contemporary art], Nathalie Heinich writes about a work of art that was sold to a museum on paper. According to the terms of the contract, the museum even committed to making the work for the artist. In the contemporary art world, the artist has neither workshop nor craftsmanship. Only ideas or projects, like an engineer or a screenwriter. As though the artist had become just another ambitious technocrat.

What is more, in Curationism, how curating took over the art world and everything else, David Balzer claims that the art market is now in the hands of the curators. This is a new kind of star system, nothing but an expression of the personal tastes and the aesthetic project of the person who is showing the art. This is thematic art that fades when the show is over.

In 1968, I was 18 years old and working in the “Belgo building” on Sainte-Catherine Street in what was called the “rag” business (clothing). Since then, the Belgo has become an important hub of contemporary art galleries. Like me, the building went from rags to culture. In that span of time, society had undergone a profound transformation. Twenty years had passed since Refus global. I was among those who believed that our youth and rejection of conformity had allowed us to ensure that society had become aware of everyone’s needs.

In 1969, we got our own university. Everything was all for the best in the best of all worlds. Finally!

This, alas, did not last. Conformity, greed or the single mindset – it’s quite hard to tell them apart – quickly imposed itself anew.

This morning, we learned that one of the Belgo’s eight contemporary art galleries is closing its doors. Donald Brown, from the gallery of the same name, told a journalist from Le Devoir (jdelgado@ledevoir.com) that “Collectors only think of art as an investment.” He would prefer to believe that “art is not investment, it is something that expresses our identity and follows us through life.” I would add that, for this to be true, art must not necessarily be labelled contemporary. I don’t believe in a type of art that targets its market. Art must be a product of the artist’s extreme sensibility, it must even be inspired by what it feels like to live in a certain place, at the heart of a given society rather than another. Art in Hochelaga-Maisonneuve must not attempt to imitate the art coming out of New York, Tokyo, London or even more inexplicably, the Basel Fair.

Picasso said that artists spend ten years freeing themselves from the influence of what they learned in art school. Ernst Gombrich was one of the most eminent members of the Vienna School, which I’ll write about more in depth another time. Ernst Hans Josef Gombrich, who was born in Vienna on March 30, 1909, and died in London on November 3, 2001, was an expert in art history and the iconography of the XXth Century. He said that true artists are not in conversation with their audience (the market) but with their own work.

I don’t understand why an artist who is just starting out should feel saddened by the fact that their work isn’t shown in a context that, for a number of dubious reasons, has become a new kind of aesthetic conformity. This is not to say that there can be no contemporary art. Only that this cannot be what pushes one to undertake the project of leading an artistic life. I don’t understand why those who are just starting out aren’t ploughing headfirst through every type of conformity, especially when it comes to art. I don’t understand why we keep ourselves from digging up the dirt beneath our feet as though it were made of our own heart and guts, with our nails, if need be. 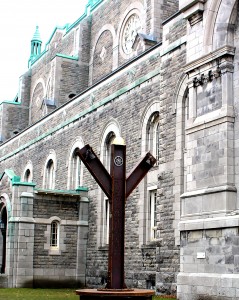