Is there any counter culture?

Accueil Is there any counter culture?

On February 23, 2016, at the Olivieri bookstore, I attended a launch for a collection of essays on the countercultural movement in Québec. Much of the conversation focused on Mainmise magazine, because from 1970 to 1978, the publication was one of the counterculture’s main boosters. In its own modest and courageous way, the magazine served as the encyclopaedia of North American counterculture for people living in Québec during those years. It was a kind of Québécois Whole Earth Catalog. I was there. I believed in it. Of course, there were two aspects to the magazine that I found particularly naive: firstly, its more light-hearted and superficial content, and secondly, its firmly-held belief that one must experiment with drugs to free one’s mind. Forty years later, I still believe that a counterculture is essential to the well-being of any society. It serves as a kind of antibody against our civilization’s inevitable ossification, or of any civilization that can’t resist the imperialist impulse.

During the book launch, we were shown a dead body that had become a skeleton. Five authors showed us each a shinbone, a fibula, a rib. But no skull. I asked whether the counterculture still existed. No one who was present, in a large crowd made up of people of all ages, from those who were figureheads in the movement forty years ago to the panel of trained specialists, could provide an answer. I thought of L’Osstidcho, of the performers involved and what they and the show had become, and I stepped up to the microphone to ask if the counterculture hadn’t simply been an expression of the youth who were having trouble conforming to the normative culture or a reaction on their part that showed that they couldn’t wait to fight for their place in society. There was no response. The crowd and the panel of experts didn’t know how to answer. They just shrugged.

I also said that I believe that all civilizations deteriorate over time and that ours is on its last legs. Was I heard and understood? I don’t know, but my comments provoked a reaction in the room.

The counterculture is no longer where we believe it to be. It lives on in the scientific discoveries that have been made over the past fifty years. In Cognitive Justice in a Global World: Prudent Knowledge for a Decent Life, a collection of essays that he edited, Boaventura de Sousa Santos insists that there should be no separation between the humanities and the natural sciences. From now on, we must consider the fact that there is no separation between humankind and nature. In fact, nature is a part of humanity and every other living thing, which is why human beings become authors thanks to their “culture” and actors thanks their “nature.” Consequently, no single human can claim to deserve to rule over other humans or prove that he or she would serve as the best guide for a great number of people without the help of the people themselves.

I believe that the counterculture such as it is understood and studied today has simply become a commercial branch of the normative culture. A fond memory. A commercial object, an object that is to be studied like any other. There is no longer a counterculture because there is no longer a real culture to which it can set itself up against. We live in an era that is devoid of culture. We are left with cultural entertainment. Any event that claims to be the expression of “high” culture has become a stale gathering for the chattering classes.

Anglo-saxon capitalism, which has globalised greed and maintained its stranglehold over politics, puts us all in danger. We all feel threatened. Many find refuge in what they believe to be reassuring certitudes. We can no longer think. Society plays host to a sense of dizzying alienation.

Anxiety does not express itself through words alone (cf. Allan N. Schore, La régulation affective et la réparation du soi), it also uses the words that it finds. Words that are but characters who remain in the shadows on stage. We only rarely understand that to study an actor’s interpretation on the stage does not help us to understand the actor that must live off the stage, in their yard or their garden, without hiding behind a character’s mask.

We believe that we are conforming when we judge everything that awakens our consciousness and anxieties rather than try to discover what has provoked our anxieties. 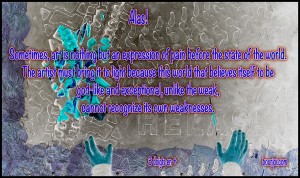 (Click on the image for a bigger version. HÉLAS! L’infirmité, by Bourjoi)

Translated from the French by Rémi Labrecque. To get in contact : info@bourjoi.com